ARMTECHANDARCHERY NOTICE BOARD.!!!! FREE SHIPPING ALL MONTH OF JANUARY AND FEBRUARY 2022 Dismiss 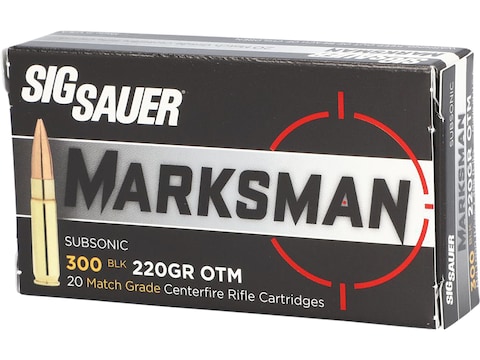 Sig Sauer Elite Performance 300 AAC Blackout Ammo 220 Grain Open Tip Match ammo review offers the following information; Sig Sauer Elite Performance ammunition is an impressive cartridge that is built from the ground up to be an ultra reliable and accurate defensive cartridge. Using only the finest components combined with Sig Sauer’s exacting standards and modern manufacturing processes to ensure that shooters have the very best Sig has to offer. Stationed in New England, this American made brand is known for many of their superior firearms along with many additional products, now including ammunition. An extremely popular firearm brand throughout the USA with military and law enforcement, Sig Sauer decided to expand into ammunition carrying that same high quality standard especially with the Elite Performance line.

There are no reviews yet.